What is Docker used for?

Start an APP from Build

First cd into the directory contains a Dockerfile .

The . at the end denotes that a Dockerfile is at the current directory.

The file uses WORKDIR to specify that all subsequent actions should be taken from the directory /usr/src/app in your image filesystem (never the host’s filesystem).

Now we can run this app by a docker run command.

When you use docker run the second time, it creates a second container from the same repository. This means that if you repeatedly use docker run and create a bunch of containers, you’ll need to get a list of the containers you’ve created and maybe at some point destroy them.

Virtual machines provide hardware abstractions so you can run operating systems. Docker for Mac and Windows users, and almost all cloud computing users, will run Docker inside virtual machines.

Further more, each is running as a child process of the Docker engine, wrapped with a container, and the delegate process is running in its own memory subspace of the user space. Programs running inside a container can access only their own memory and resources as scoped by the container. 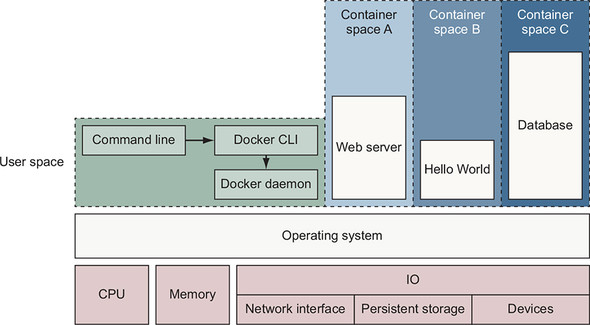 Docker keeps things organized by isolating everything with containers and images.

Figure 1.3 Example programs running inside containers with copies of their dependencies

What's more, containers limit the scope of impact that a program can have on other running programs, the data it can access, and system resources.

The 10 Major System Features Docker Use

Docker uses those to build containers at runtime, but it uses another set of technologies to package and ship containers.

The component that fills the shipping container role is called an image. A Docker image is a bundled snapshot of all the files that should be available to a program running inside a container. And images are the shippable units in the Docker ecosystem.